Ok, so a mate asked me how my mouse pad looked.

Here’s a quick post. This mousepad we got from the Otaku Magazine guys when the mag was still on sale. Unfortunately, due to minimal feedback the magazine was shut down.

Much to our dismay, I might add. We did, however, attend the final party with the guys and all I can remember was weed, alcohol and someone brought a guitar. 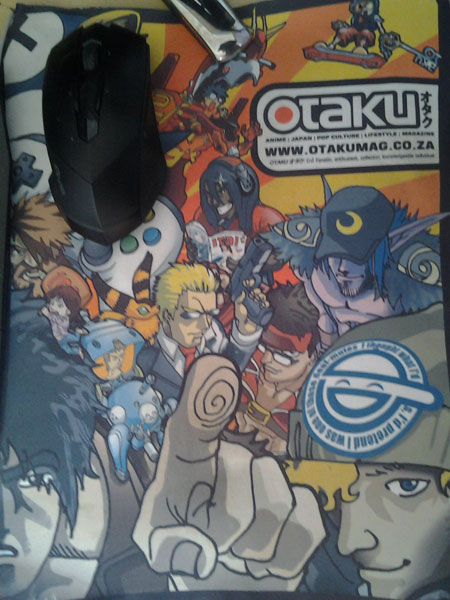 It’s been coming for a while. The previous  theme was just, well let’s call it, “not my best work”.

This means I have no excuse to be active on this little spot. There’s a lot of stuff I need to get out of my head before it explodes. However, work comes first.

Finally done with work. What an insane day. Come to think of it, the whole week was one fucked up game.

Luckily, I’m done now and I’m prepping for the Bong & Guitar bash at my mates place. Here’s some pics:

My chassis (Gigabyte Aurora 3D) is far from small. All in all, it is a very decent computer chassis. Lots of space, clear paths for air and not a far way from pretty, either. This chassis has served me really awesomely the past couple of years. My dev PC specs are:

That’s without the power supply and chassis. The old chassis was a Gigabyte Aurora 3D chassis. I’ve always been a firm believer of Dry Cooling when it comes to computers. Sure, liquid cooling has been around for a while but I’ve never really trusted it. However, since I’ve gotten the i7 my CPU use to idle at roughly 70-85 degrees Celsius. This is obviously an insane heat for an idle CPU. When I play push the box it shoots up to 90-101 degrees Celsius. Fast forward to the weekend past and I came to the conclusion. It’s time for a liquid cooling solution as the dry cooling isn’t cutting it.

I started my research on-line to see what was available. The chassis I wanted was unfortunately 11k, which I would rather spend on strippers than my computer.

After some scratching, I decided on the Gigabyte 3D Mercury chassis. This chassis included a liquid cooling solution. I placed the order yesterday morning and 3k later I had my chassis. I finally got home from work, more excited than a paedo at a pre-school, itching to build my pc into my new box.

2 hours and 2 blunts later I had the case built. I figured that, I might as well show the world my new chassis. So, without further ado, here’s the pics:

July 2011 was a month I was dreading the whole year. That would have been the month where I had to renew my drivers license. It so happens that during this time there was quite a bit of hoo-ha around the whole renewal process.

Systems were down, people were losing their cool, it was quite the cup of chaos. The place I had to renew my drivers license was “Langlaagte”. I shudder at the mere thought of having to go to that place. Not only..hhmm.. It would seem that my [backspace] key is a little bit stuffed. I typed out half a paragraph and when I reached for my smoke I dropped my lighter on the [backspace] key and it  magically decided to get stuck and wipe everything out. Lucky for me I have the short term memory capacity of a fruit cocktail. This means that whatever I was busy typing, is gone. Alas.

It’s amazing how one’s brain can be such a mighty tool in certain environments and in others as useless as a nail clipping on planet Rupert.

Back to the main feature:

I realized that at some point I’d have to bite the proverbial washing machine and get the license renewed. By September 2011 I had finally mustered the courage and patience I would need to face the “Langlaagte Foe”. I made arrangements at the office that I’d take off on Tuesday to get my license sorted out. Unfortunately for me, work was being it’s usual fist-chest-air nazi I had known it to become. Finally, November 2011 is here and while I was driving to a client I realized that there was a lot more Cop activity than usual.

It struck me: “November/December SAP & Metro Bonus Time Project” has been initiated.

This meant that I had to renew my license, pronto. Last night was my sister’s birthday and the family got together. I found out by my cousin that the License Department in Meyerton was apparently pretty zippy. I figured, what the hell, might as well give it a chance.

Took me about 45 minutes to get there, had no idea what to do as this was my first drivers license renewal. Got the form, filled it in and started what any good red blooded Englishman would do. I started to queue. I flipped out my PSP(Don’t leave home without it) and barely had time to play 2 or 3 rounds of Naruto when I was ushered into the eye testing spot. 15 minutes later I was in my car, in total disbelief. 10 minutes later I started my car, still in half a daze.

Did renewing my license really just take 20 minutes? That’s gotta be some kind of record, right? Someone must be playing some kind of cruel trick on me. Schuster, are you hiding in the bushes somewhere?

Only after I got back to the office did I finally realize the implications of the event that took place during The License Renewal Project. Meyerton License Department are fucking LEGENDS!

So, in honour of these gods among men, these organized and awesome people I figured I’d show you people where you can get hold of them. If you’re in Gauteng, it makes sense, anywhere else, good luck >;p

So, without further ado: